About The Burton at Bideford

The Burton at Bideford celebrates its 70th birthday in 2021. With its friendly team of staff and volunteers, it has been celebrating, exhibiting and nurturing all kinds of artists since being established on 31 October 1951 by local businessman Thomas Burton, and Hubert Coop, a successful artist.

The Burton at Bideford is a community venue for everyone to love and access freely and has art galleries, a shop, a French bistro café, museum, workshop rooms for hire and is Bideford’s tourist information centre.

The building itself was opened to commemorate the sad and untimely death of Burton’s daughter, Mary, who died of cancer in 1949 at the age of just 44. She was a talented artist in her own right and her father wanted the gallery to be a lasting memorial to her.

In a letter to the Bideford Gazette in October 1949, Burton’s friend Coop wrote:

‘It’s a happy chance that two old townsmen have come together to make a last effort to leave the town richer than they found it. The gallery should be a peaceful haven where one may take a quiet look at beautiful things; a gallery for the enjoyment, education and good of all, old and young, inhabitants and visitors – everyone and, as far as one can tell, of lasting credit to the living and those to come…’

Throughout Coop’s life, he amassed a fine collection of paintings, porcelain and antiques, and because he felt that there was a special appreciation of the arts in Bideford, he left his collection to the town, provided that it would be ‘properly housed’. The Coop collection now forms the basis of The Permanent Collection.

Coop was instrumental in assisting Thomas Burton (Mayor, Alderman, Freeman of the Borough, and philanthropist) to build the Burton Art Gallery. The architect was Frank Whiting, who also designed Coop’s home on Goats Hill, Northam, overlooking the river. Hubert Coop died in 1953 aged 80. In his obituary in the Bideford Gazette, January 1953, it said: ‘His generosity in connection with the starting of the Burton Gallery will be a lasting reminder…’

“The Burton at Bideford is a gallery and museum of international note, in a unique setting of a historic port on the north coast of Devon.” 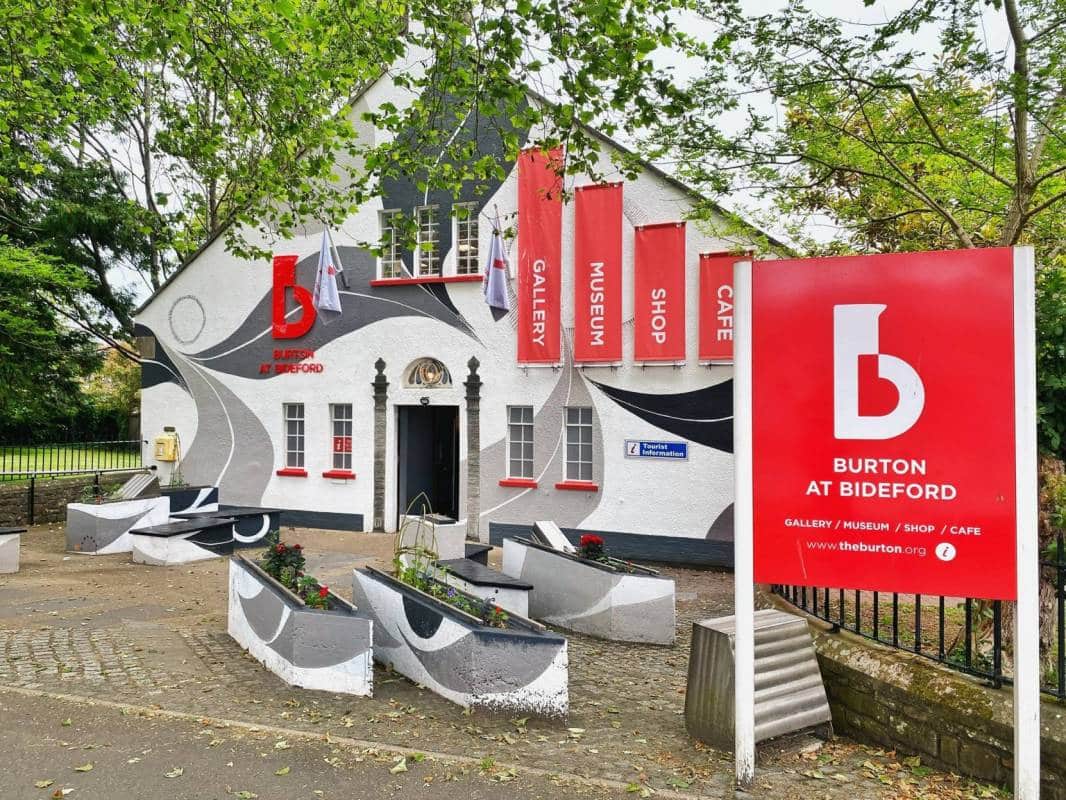 In 1994 the gallery was extended and refurbished, increasing its capacity to four times its original size. It now has three exhibition spaces, a museum, a craft gallery, a shop, an education space and a café.

In 2008 the tourist information centre service was added to the services the gallery provides. At this time, the long-serving curator John Butler retired (after 30 years service), and new roles were created, including the Visual Arts Manager, the lead managerial role, and the Collections and Exhibitions Officer.

After the gallery sitting within the Culture and Leisure Department at Torridge District Council for over 50 years, in April 2016 the Burton at Bideford became a company limited by guarantee with charity status.

We will deliver a world-class creative destination that can both inspire and challenge people. The Burton at Bideford will be known nationally as a place to visit for a quality experience with exceptional service, accessible and welcoming to all.

The Burton at Bideford is a gallery and museum of international note, in a unique setting of a historic port on the north coast of Devon.

The Burton at Bideford is a welcoming peaceful haven, that inspires creativity in Bideford and for all that visit.

We are now planning improvements to our building to increase the quality of our visitors’ experience, improve the accessibility and to be able to show even more ambitious projects and exhibitions. We also aim to extend our education programme and grow wider engagement across Devon. Please subscribe to our newsletter to hear more about our developments and to contribute to our thinking.

Become a volunteer
Become a friend
Become a supporter

Thank you from Burton at Bideford

The Burton at Bideford is lucky enough to work with a number of key partner organisations, generous artists and local business people who help provide support for us to achieve our daily work and future ambitions.

This support is, of course, about funding but it’s also about being affiliated with the gallery and museum and having a two-way relationship whereby we support each other’s goals, in terms of the charitable trust’s vision and business aims.

We’d like to especially thank Torridge District Council for their ongoing support of the gallery since its transition to a Charitable Trust. Also all of the kind support of local businesses, and the many generous gifts of works given to us by artists across the world.

We’d like to say a big thank you to the wide-ranging support our Friends and donors have given us in the lead up to creating this new website (and implementing our new branding and in-house signage too). There are too many fantastic, committed volunteers to name here, but we appreciate you all individually, and all the many ways you help the Burton at Bideford remain a successful venue for appreciating art and culture in north Devon.

We use cookies to ensure that we give you the best experience on our website. If you continue to use this site we will assume that you are happy with it. Please see our cookie policy. Continue
Go to Top